Why is Schrödinger’s cat not just dead OR alive?

In quantum theory there is a thought experiment called Schrödinger’s cat-experiment. The idea of the experiment is that there is a cat in a closed box (don’t try this at home or at all!) together with a flask filled with poison which would, if released, instantly kill the cat. Next to the flask there is a hammer whose position is determined by some kind of mechanism involving the nucleus of an atom. The details of the mechanism do not concern us here: what is important for us is that if the atomic nucleus decays then the hammer will fall, the poison will be released and the cat dies. If the nucleus doesn’t decay, then the flask remains unbroken and the cat remains unharmed. 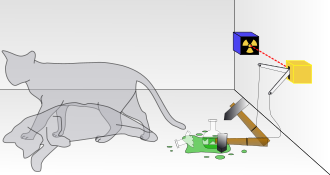 Why can’t we just assume that although we are uncertain as to whether the cat is alive or dead, the actual state of affairs is that the cat is either alive or dead? Why do quantum theorists resort to this vague concept of superposition?

To understand the answer to this question we look at a different thought-experiment from earlier in the history of quantum theory (this experiment has actually been carried out in the 1980s): the double slit-experiment. This experiment shows that particles sometimes don’t behave as particles, but as waves. Physicists call this wave/particle-duality.

The experiment works as follows. A lasergun fires a stream of photons at a screen with two slits in it. Behind the screen with the slits is a second screen, which can detect individual photons that hit it (this second screen may be thought of as a photographic plate).

If we fire the gun repeatedly, an interference pattern emerges on the second screen. Nothing is odd about that. It just shows that the photons fired from the gun behave as waves: they pass through both slits so that at each slit a new wave is created, and these two new waves interfere with each other to create the interference pattern on the optical screen (see figure 2).

But that is not what happens. If we let the photons accumulate on the second screen, then the individual bright dots gradually form the interference pattern that we saw earlier: again there is a pattern of alternatingly bright and dark bands!

If you don’t believe me (and I wouldn’t if I were you), take a look at the video-clip below to have Anton Zeilinger (who actually did the experiment) tell you the same thing.

Well, we could adopt such a stance, but then we would have a very hard time accounting for the emerging interference pattern.

We could of course assume that every photon passes through only one slit, and then mysteriously splits into many copies of itself which hit the second screen in different places, so as to produce a pattern that looks like an interference pattern. Or we could assume that the laws of motion for particles in the experiment are (or appear to be) different from what we’re used to in the macroscopic world (a proposal for such alternative motion is shown in figure 3).

We could make either of these assumptions, but then we’d have to give up on our intuitions about either energy conservation or particle motion. It seems doing away with nonsense in quantum mechanics is a bit like ‘whack-a-mole’: the moment you press it down in one place, it re-emerges in another.

We now see why quantum physicists are reluctant to assume that Schrödinger’s cat is either alive or dead. Quantum physicists resort to the concept of superposition to describe interference patterns like that in the two-slit experiment. But by using the word ‘superposition’ they do not (or at least, should not) claim to know what is going on.

Fig 4. Doing away with nonsense in quantum mechanics is a bit like ‘whack-a-mole’: the moment you press it down in one place, it re-emerges in another.

*) At least, as quantum theory is usually interpreted.

**) Trajectories of particles in the Bohmian interpretation of quantum mechanics

Philosopher of physics at Amsterdam University College and Utrecht University, managing editor for Foundations of Physics and international paraclimbing athlete
View all posts by fbenedictus →
This entry was posted in AUC-Big Questions in Science. Bookmark the permalink.

1 Response to Why is Schrödinger’s cat not just dead OR alive?