At the basis of Newtonian mechanics lies an idea we call galilean relativity, which is the idea that different observers will come up with the same laws of motion as long as their reference frames are not accelerating relative to each other. The reason that acceleration is ‘special’, is because Newton defined force in terms of acceleration: If force equals mass times acceleration, then an accelerating observer will see other forces than a non-accelerating observer.

When two people see something happening, and one of them is moving while the other isn’t, they will see different things. Imagine people playing a game of tennis inside a moving ship, and compare them with someone on the shore looking at the game.

Differently moving observers see different things, yet these observers agree that the laws of physics are the same, and that momentum is conserved – How can that be?

The tennis players and the onlooker disagree on the motion that takes place, but they nevertheless agree on the laws of motion. In their own reference frame they see different velocities, but the acceleration seen is the same in the different reference frames. To see how that works, we consider an example. 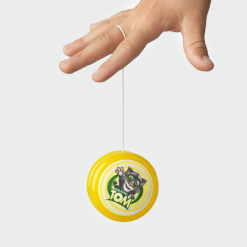 A familiar, everyday, example is playing with a yoyo: it doesn’t matter whether you do this at home or in a moving train; the laws we use to describe the motion of the yoyo  are the same, which means that the throwing and pulling you need to do to get the yoyo to move the way you want is also the same.

This text should give the reader a basic idea of what the Newtonian view of physics/mechanics is, and particularly the role that acceleration and galilean relativity play in it.

Philosopher of physics at Amsterdam University College and Utrecht University, managing editor for Foundations of Physics and international paraclimbing athlete
View all posts by fbenedictus →
This entry was posted in AUC-Big Questions in Science and tagged acceleration, galilean relativity, galilean transformation, reference frame. Bookmark the permalink.