The part of Kant’s philosophy that I’ll be discussing in this post is Kant’s view on human knowledge. The central idea of Kant is rather straightforward: the world must be such that knowledge is possible. The world, according to Kant, must be structured in such a way that our knowledge of that world is possible. And since we have knowledge (otherwise we couldn’t live our lives) the world must have certain structural features that make this knowledge possible.

It sounds like Kant is stating the obvious here. We have knowledge of everyday objects; for example, we know that heavy objects (such as stones) fall. In Kant’s view it follows from this that it must be possible to think about heavy objects and about ‘falling’. Ok, so there must be the possibility of knowledge in order to have knowledge – sounds pretty simple, doesn’t it? 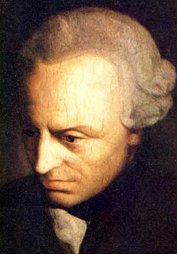 Things become complicated when Kant tries to specify what it means to be able to think about objects and processes. Thinking about a falling stone is impossible, Kant believed, without thinking about this process in terms of causal laws. Kant’s argument therefore boils down to the following: causal laws are inherent in knowledge; we have knowledge, so causal laws must exist.

Modern science presents numerous challenges to Kant’s and Newton’s view on causal laws. In the theory of special relativity the concept of time loses its absolute character and it therefore becomes impossible to say which events precede which events. What does it mean to say that some event causes another if there is no ‘earlier-than’ relation? Causes in quantum theory are even more problematic: in quantum theory there are events which have no cause in the Newtonian sense at all.

These scientific developments suggest that Kant was mistaken when he said that causal laws necessarily exist. Modern science shows that knowledge (in the form of scientific theories) is still possible without causal laws. And yet Kant’s central idea – that the world must be such that knowledge is possible – is still a truism. It’s just that we’ve come to realise that our knowledge does not coincide with knowledge in Newton’s physics. How should we make sense of Kant’s idea in the face of modern physics? One option is to replace Newton’s causal relations between events with relations of probability. That works as follows.

Suppose a scientist repeats a measurement a number of times. For example, she repeatedly measures the length of a stick. No matter how accurate the measurements are, they never yield exactly the same results because there are always infinitely many possible disturbing influences (the wind, a varying temperature of the stick, ambient air temperature, quaking due to seismic activity; you name it). If the results of the measurements were put in a graph then we would not find a straight line (representing equal measurement-results), but a normal distribution (a Gaussian, or bell-shaped, curve; see graph). Someone with a strict belief that everything in nature follows the same causal laws may believe that different measurement-outcomes are due to measurement disturbances, but she may as well believe that the different measurement-outcomes refer to differently sized sticks (compare a sociologist who is not sure whether the variations in her data are due to variations pertaining to one individual or to variations within a population of individuals).

A normal distribution, which is symmetrical around some average value

Back to Kant and to his possibility of knowledge. After our analysis of the role of probability in science, we might now determine how assumptions about probability theory make knowledge possible. The philosopher/physicist Hans Reichenbach (early 20th century) diagnosed a deficit in Kant’s philosophy: Kant’s idea is relevant not for knowledge per se, but for scientific knowledge. The above considerations show that the possibility of scientific knowledge requires that the scientist makes certain assumptions about the theory of probability. Probability theory serves to flesh out the import of Kant’s philosophy for modern science.

Philosopher of physics at Amsterdam University College and Utrecht University, managing editor for Foundations of Physics and international paraclimbing athlete
View all posts by fbenedictus →
This entry was posted in Philosophy of Physics and tagged Kant, logic, mathematics, physics, Probability, Reichenbach, statistics. Bookmark the permalink.