Alice and the Friendly Minotaur

Previously in ‘Numbers in Wonderland‘

‘I wonder what would be left,’ Alice thought to herself, ‘if I take five apples and throw away the apples’. ‘What would it feel like to have five in my hands?’ I guess it would be heavier than three.’ 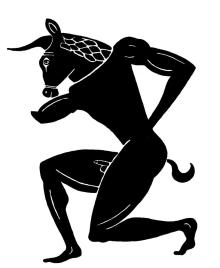 Alice had left the mad tea party because all the questions about numbers had confused her, and she didn’t like that at all. When she had asked the Hatter whether we can’t do without numbers, and just stop thinking about them, he had told her to ask the Minotaur. “The Minotaur lives deep in the forest and since his name starts with an M,” the Hatter had said, “he must know quite a lot about mathematics, which also starts with an M.”

So Alice started walking into the forest. After a while she heard noises coming from a distance. Alice walked towards the sounds and when she had come close enough she could make out a voice saying “starting position…1…2…3…go!” Alice stealthily sneaked in a little closer and from behind the trunk of a large tree she saw the oddest thing her young eyes had ever seen. It wasn’t so strange to see a minotaur. Alice had seen minotaurs before,  in her sister’s books on Greek mythology. Actually the mythology-book was the only one of her sister’s books that Alice liked, because it had a lot of pictures in it. And some of these pictures were of minotaurs. The odd thing about this particular minotaur was that he was doing a foot-race…all alone!

Alice waited a little while to see whether any opponents would show up. Perhaps the Minotaur was only practicing, which would explain why he was alone. When several minutes had passed, and the Minotaur was still alone, Alice’s curiosity got the better of her. Although the Minotaur was several times as large as she was, and had two dangerous-looking horns on his head, Alice stepped from behind the tree. She was not afraid, but because she did not know the proper manner to address a minotaur she started speaking stutteringly: “excuse me…mister, or misses, minotaur…” ‘Or perhaps I should only have said “Minotaur!”‘ Alice thought to herself.

The Minotaur slowly turned his large head and Alice was not sure whether the sound he made was due to some very heavy breathing or whether it was a discontented growl. By now Alice had become a bit frightened. ‘Maybe he doesn’t understand English,’ Alice thought, ‘and will become angry when he finds out I don’t speak Minotaurian (or do minotaurs speak Minoan?)’. Once again Alice’s curiosity gained the upper hand, and she blurted out what was on her mind. “Why” she asked with an unsteady voice, “are you racing by yourself? Wouldn’t it be nicer to have someone to race with? A race is no fun if you can’t win!”

The Minotaur grinned. It was a friendly grin, not an I’m-going-to-eat-you-grin. With a deep but friendly voice he said “What do you mean ‘can’t win’? I always win”. Alice thought for a moment and decided that the Minotaur was wrong. But even though the Hatter had called him the Friendly Minotaur, Alice didn’t want to spoil the Minotaur’s good mood, so she said “I’m sure you do,” while pretending to admire his muscular legs. “But that’s not why I’m here” Alice said in a stern tone of voice. She tried to use the voice that she often heard her father use  when he spoke to the horses. I have a very difficult question.” She continued, “and one of your neighbours, Mister Hatter, told me I should ask you.” The Minotaur grinned again. “If Mister Hatter said so,” he replied with his deep voice, “then it must be true.” Alice was relieved to hear the Minotaur speak so clearly and friendly “so you know Mister Hatter well then?” she asked. “Never met him,” the Minotaur said, “so I’ve never heard him tell a lie. And since I’ve never heard him tell a lie, I wouldn’t expect him to lie now.” The Minotaur’s reasoning puzzled Alice, but she nodded as if she understood. “But the question that I have,” Alice hurriedly continued, “is whether we really need numbers.” The Minotaur sighed. “Walk with me,” he said.

Next episode of ‘Numbers in Wonderland’

Philosopher of physics at Amsterdam University College and Utrecht University, managing editor for Foundations of Physics and international paraclimbing athlete
View all posts by fbenedictus →
This entry was posted in Numbers in Wonderland, Philosophy of Mathematics. Bookmark the permalink.

3 Responses to Alice and the Friendly Minotaur